Mistress K is the “Professional Domme from Latin America, who loves teasing, abusing and torturing helpless submissives. Goth Mistress who dominates with a sweet smile and merciless hand.”

She doesn’t claim to be the only Goth Latina Domme in London but she might be. Her unique and stylish photos are only in (of course) black and white and they can be found at: www.mistressklondon.co.uk/

Tell us Mistress K, what’s it like being one of the only Goth Latina Dommes in London?

What does it mean to be Latina?

Not salsa-dancing on a beach! Latinas are fiery women who grow up in a macho sexist world where they learn to defend themselves and take no nonsense from men.

How does being Goth explain more about you?

Goths are sexy, dangerous and ‘no bullshit’ honest. For me it’s belonging to a sort of tribe that allows me to express my beliefs and ideas. I receive a lot of messages from men saying that being with a Goth Domme only heightens their fantasy.

What effect did your upbringing have on you now?

Growing up where I did, I decided men should be punished, not just mentally but physically.

Are there other Goths where you come from in Latin America?

Haha! Only about 30, we all know each other.

What is your personal style as a Domme?

I actually think my style is a bit different. I don’t yell at men or tell them they’re worms.

Of course, when someone needs to be punished, I do it. But mostly I love teasing, mentally abusing and torturing and I will turn you into a quivering wreck- but with a sweet smile.

Everything I do is driven by passion and my number one passion is controlling men, sexually and psychologically. 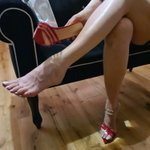 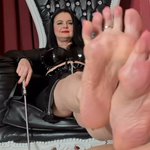 Can you see how pumped she is? Just watch ❤️❤️

Please use the link above in bio to vote for her 💋❤️💞💞💞