Me and My young friend - Assistant Goddess Shiva spend together the afternoon having a face slapping session.

We humiliate Our sub, and slap his face, alone and together!

Face slapping lesson, this is how you treat men - full

Me and My lesbian friend is My slave-girl in this video where I feature leather worship, lesbian domination and so much fun! 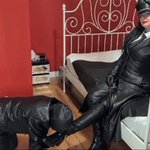 Want to see what's behind the mask?

I have a very special Face Reveal Offer that a few SUPERFANS have invested in.