Here is the speech (had to be 3 minutes and I only had one day to work on it!):

The first line is IRONIC:

Sex worker voices are consistently silenced especially when we refuse to be framed as victims of the work we do.

We are denied bodily autonomy though we are women making choices based on the best options we have with the odds stacked against us.

Sex workers are women of every ethnicity, LGBTQ, migrant workers and immigrants, we are human beings working to survive, women who are working to take care of our families by way of a living wage. We are Survivors, warriors, healers, teachers, and dreamers and we want to be able to thrive

But sex workers are criminalized and this maintains our status of being underrepresented, marginalized, stigmatized, disenfranchised and easy prey.

To achieve this, prostitution must be decriminalized.

Opportunistic politicians have promoted and passed policies that have further criminalized prostitution under the guise of rescuing sex trafficked victims. These failed laws only serve to elevate politicians to their next elected office, these failed policies only serve to promote further criminalization and negative stigma against all types of sex workers.

Millions in your tax payer dollars have been wasted by police and NGO’s alike under the guise of providing us ‘services’ and ‘rescuing’ us.

Under the guise of rescuing us, sex workers are arrested given criminal records and we are forced into shaming treatment programs.

An arrest for prostitution amounts to a lifelong sentence that will block access to housing, employment and render other important life opportunities impossible.

I know a woman who was refused employment and housing based on a dismissed prostitution charge on her record!

When sex workers are witnesses or victims of crimes they are unable to report for fear of being arrested and they know if they do report they won’t be treated as equal human beings.

Sex workers need equal protection under law, we want control of our labor, sex workers want and need to be decriminalized.

The Denver #womensmarch telling me no (after telling me yes and even listing me today on their site as a speaker then copping out at the LAST MINUTE) doesn’t dampen my motivation. I knew they’d likely behave as they have. They say they wanted me to talk about MY personal experiences…..

It didn’t matter to them that out of EVERY other speaker who is speaking and who was turned away none of them would have been RISKING their lives and their family to speak.
Not one of them were risking getting arrested by standing up and speaking. None of them could potentially be discriminated against or ostracized in their communities for speaking out. It was no light thing to get up there, and I wasn’t exactly relishing it on that platform. The only scenario I can think of here would be an immigrant risking deportation.

I was motivated on principle.

Neither did I want to take the ‘sex work apologist’ route! Which I think would have bought me the ticket. I had spoke to one of the organizers about my personal experiences privately during the process of trying to get chosen.

Poor addicted homeless or NOT, our liberty interests are being violated by criminalization!

The reasons they cited for going back on their word (you’re only as worthwhile as your word) – aren’t good enough up against what they CLAIM to stand for.

My speech originally spoke about cops coercing sex in exchange for not arresting, cops having sexual contact prior to arresting but they were being strict about the three minute limit and I had to decide carefully how to pack as much in there and not be totally overwhelming people’s brains. Assuming that most there wouldn’t have a damn clue about the issues sex workers face to begin with.

My speech originally said “people” instead of “women” because I didn’t want to exclude men who are sex workers or anyone. It’s natural for me to include everyone. But it being ‘the WOMENS march” and how I was already on a sharp edge- I changed it.

Maxine Doogan took time out of an already overwhelmed schedule to assist me with this speech.

#WOMENSMARCH YOU ARE PART OF THE PROBLEM.

Links to Domina Elle and More 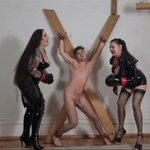